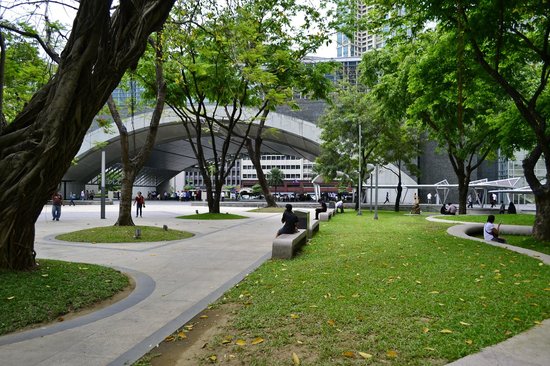 A walk in the park

That was how I felt earlier this week. It was a Sunday and I was fresh from attending my baby niece’s baptism and subsequent party. I spent the rest of the day binging on Iron Fist 2 on Netflix while enjoying a refreshing cup of milk tea with pearls. Before having dinner later in the day, I thought of doing some lifts at the mini-home gym set up in my bedroom (by my dad, originally for him to use).

It was my turn to wash the dishes and wash the dishes I did. Doing so on a Sunday is typically something I dread, because of how long it takes me for to be done it with and some more. However, I have gotten used to the work load that it felt like second nature to me.

That night, not only did I wash the dishes, but I also made the extra effort to take out the trash and wash the tiled counter near the stove and re-wash the previously clean and unused pots that my dad would use to place his ladle when he’s cooking just because of the convenience that they are there, instead of using the actual ladle holder my mom specifically bought for him to use.

Anyway, all of these would have naturally left me tired enough to wanna head to bed, but something felt different this time around. I felt tired twice over. The night was still young and I still had one more household chore to do before retiring myself to bed, and that was to fold clean laundry. I did that knowing that whatever it is that’s ailing me is might get worse the next day.

Sure enough, as I head to bed, I started feeling some chills. I knew that if I let this go on, I’ll become feverish in a few hours so I did some home remedying.

I closed all the windows in my bedroom so it would feel humid (I live in a tropical country FYI), drank a paracetamol for the pain and headed off to bed. The idea is for my body to break a sweat once the fever comes and goes in the night.

That seemingly did the trick but the path to recovery the following day was difficult.

For one, I felt like even if the weight that was on my shoulders have been lifted off, I still felt the soreness brought upon by it. It didn’t help that as I came to work that the office’s airconditioner was set so low on the thermostat that I was freezing.

Knowing that commuting from work was going to be a struggle later in the day, I made sure I’d be able to just take my time getting a ride and get home as soon as possible. With the high humidity outdoors (and a pending rainstorm), I was sweating the entire trip. Luckily, I wasn’t profusely sweating as much but with the amount I was secreting, my body was adjusting for the better and the soreness was for the most part minimized.

The next day (which is today), I feel whole lot better but not yet to how I was before everything happened. And since Tuesday is when I do my morning runs, I decided to take things slow, walk, and do some stretches. I don’t want to compromise my recovery by jogging but I also don’t want to skip the only times I actually squeeze in a half hour to maintain my fitness so this was the best way forward.

I’m not entirely sure what caused my body to suddenly feel exhausted but for sure, it would not have been me lifting weights that day that weren’t particularly heavy and for only a few minutes. It probably was due to the chores I did that night, maybe.

Without seeing a doctor, there is no certainty of what made me feel that way. I guess I may have to just to be on the safe side.

With that said, I need to remind myself never to sacrifice my health and to push myself so hard.